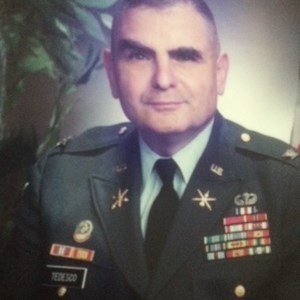 Vincent J. Tedesco, Jr., was born in Jamaica, NY in 1943. His parents were Vincent James Tedesco, Sr. and Angela Agnes (Letterelo) Tedesco. Vincent, Sr. came to the United States in February 1921. Vincent, Jr. had one brother, Michael Thomas Tedesco.
He graduated from the Pennsylvania State University and was commissioned a second lieutenant of Artillery in the Regular Army in 1964. While at Penn State he was co-captain of the lacrosse team and a member of Delta Upsilon Fraternity. He was the starting goalie. He was selected as one of the outstanding freshmen athletes and was All League and All Conference. He and three high school lacrosse teammates established the ”Friendship Cup” which is presented each year to the winner of the lacrosse game between Penn State and Rutgers.
He earned a Master’s degree in business administration from Bucknell University and is a graduate of the Army Command and General Staff College and the Naval War College.
He retired from the Army, as a Colonel, in 1991 after 27 years of service. His military awards include the Silver Star, the Legion of Merit (2), the Bronze Star, the Defense Meritorious Service Medal, the Meritorious Service Medal (4), the Army Commendation Medal, the Joint Service Achievement Medal, and the Vietnamese Cross of Gallantry with Silver Star. He commanded 3 batteries, the 1st Battalion 3rd Air Defense Artillery, 101st Airborne Division and the 6th Air Defense Artillery Brigade. After his retirement, the Army honored him by making him the Honorary Colonel of the 44th Air Defense Artillery Regiment. He has also received a number of honors: the rare honors of having a street, Tedesco Way, at Fort Hood Texas named for him; the leadership award for lieutenants at the Air Defense Artillery School is named in his honor; a picture was painted of the fight he led in Vietnam and a wing in Snow Hall, the home of the Air Defense Artillery and Field Artillery, has been named Tedesco Wing! The Penn State Army ROTC Battalion

Is Your Company or Spouse a Member?

If you are an employee of an ADAA Corporate Partner company or the spouse of an individual member (1 Year or Lifetime), we invite you to set up an online account to:

The members of ADA Association invite and encourage you to join! By working together, we can achieve our mission to maintain and enhance our industry as a whole.

All membership applications for ADAA must be approved by the Board of Directors.